“Every dog has their day”. The famous seventeenth-century line uttered by Hamlet could not be more accurately and appropriately applied to Sleeping Dogs, the sleeper hit of 2012 and a game which, after Activision had cancelled and left it for dead, seemed destined for doom.

Thankfully, Square Enix picked up United Front Games’s love letter to Hong Kong and quality open-world gaming, and I am glad they did, because while it hasn’t exactly revolutionized open-world and sandbox gaming, it certainly has raised the bar up a whole other level.

Sleeping Dogs immersed me for a good 20 hours for many reasons: a solid and action-packed hand-to-hand combat system, great variety of missions and activities, and a pretty rendition of Hong Kong to lose myself in. But the one thing about Sleeping Dogs which stands out above the rest, and what it does better than a lot of its competitors is its deep, well-written storyline and its rich set of likeable, complex characters.

The core of the narrative is linked to the morality and the duality of Chinese-American undercover police detective Wei Shen, a skilled and experienced cop who is tasked in infiltrating the Sun On Yee upon his transfer to the Hong Kong Police Department. The Sun On Yee are a deadly group of Triads who rule over Wei’s old childhood neighborhood and most of HK, and taking them down from the inside becomes Wei’s number one priority.

Wei is no stranger to violence, death and gangs, as evidenced by the game’s detailed character reports which offer a wealth of interesting backstory and which unlock over the course of the game. He will be surrounded by dozens of equally conflicted, complex and interesting personalities, such as childhood-friend turned low-level amateur Triad, Jackie Mah; concerned police handler Raymond Mak; and the violent and intimidating Sun On Yee Red Pole, Winston Chu, all of whom have equally compelling voice-actors behind them.

Wei’s journey through the ranks of the Sun On Yee is further complicated by his need to balance his violent gangster facade while also upholding the law and retaining his fluctuating morality. The moral dilemmas Wei faces and the decisions he is forced to make in relation to staying true to the badge while maintaining the criminal code of “honour”, combined with his own personal scores to settle with the Triads makes Wei’s story genuinely engaging and thrilling, and his journey into the underworld of Hong Kong will see him truly risk it all; truth, loyalty, and justice, in a world where they have no clear place. What exactly he strives to risk it all for becomes increasingly obscured as the game progresses. 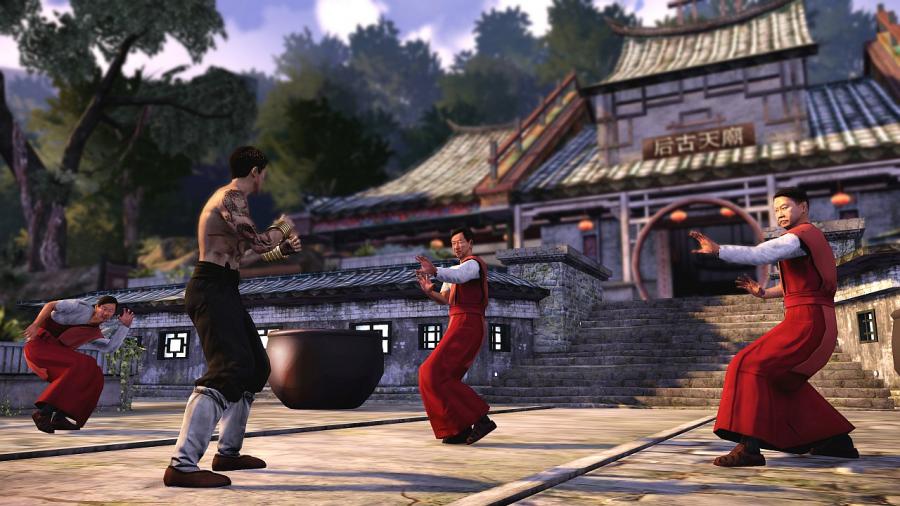 The deep, gritty storyline and quality of dialogue, along with United Front Games’s effort in the employment of a range of talented Hollywood and Chinese voice talent such as Will Yun Lee, Lucy Liu and Emma Stone help breathe believability, authenticity and realism into the game. Even the NPCs have life to them in the way they go about their business and the hilarious banter they have when interacting with each other. The mixture of Cantonese and English dialogue and subtitles in particular was handled well and reminds us that we’re playing in the exotic location of Hong Kong rather than another American city, though the American accents and the radio stations littered with American pop culture might disengage players from the setting and remind them of the developer’s true origins. Still, Sleeping Dogs is definitely a cut above the rest in the storyline and character department, and any dismissal it might gain as just another generic open-world shooter would be severely misguided.

Just as the core of the narrative is linked to the morality and the duality of Wei Shen, so is the gameplay. Sleeping Dogs incorporates a unique levelling system which consists of three areas; Face, Cop and Triad. Each mission, action and activity bring about experience points in the three areas, which help Wei by granting him new upgrades and abilities when he levels each area up, ranging from new moves and extended combos to finish off unlucky enemies with, to access to nicer clothing with stat bonuses to wear and impress the ladies.

Depending on how you handle the mission, you will be awarded certain experience points from certain areas. So if you’re driving recklessly through the city knocking down pedestrians and destroying public property while trying to solve Wei’s case, expect to lose Cop points as well as get chased down. If you maximise Wei’s brutality against his enemies, such as burning them to a crisp using a nearby incinerator and prolonging their agony, expect to be rewarded with Triad rep.

Face points are a little different and sort of represent what the general population of Hong Kong feel about Wei and his actions. Helping out a fellow gangster by being his getaway driver or providing muscle for the local night market stall keep are the sort of things that will net you an increase in Face rep. Combat in Sleeping Dogs is, while somewhat basic and button-mashy, satisfyingly fast-paced, fluid and exciting. The brawler combat emphasises martial arts, acrobatic-like moves and realistic street fights rather than the over-exaggerated close quarter abilities of Batman in Arkham City, which the game certainly takes some cues from. How it mixes it up and does even better than Rocksteady’s formula is in the quality of the animations of the kicks and punches and combos, how they flow and the weight behind them when they connect; the upgradeable combo system; the variety of environmental objects and places Wei can use to finish off an opponent, such as throwing them in a dumpster or burning their face to a crisp in an incinerator; and the balanced mix of gunplay thrown in to even out the superior number of criminals you’ll be facing. Throw in upgrades for your combos by returning stolen Jade Statues to a former Kung Fu mentor and a few melee weapons such as knives, machetes and even a live fish, and you’ve got an interesting and deep combat system to play with.

Shooting sections, in particular, feel reminiscent of Gears of War minus a bit of polish in the cover system, with Wei able to blindfire, shoot from cover and so on. Wei has the additional ability of vaulting over cover and slowing things down in a bullet-time-esque slow motion mode, capping fools with style and speed and is a welcome extension of the parkour-type acrobatics and moves emphasized in the game.

Exploring the bustling and vibrant city of Hong Kong as Shen and interacting (or beating the hell out of) its eccentric citizens feels extremely authentic and immersive. Each of the four districts of the city and its inhabitants are as distinct as the last; Central is full of tall, modernized skyscrapers, luxury brand stores and well-dressed civilians with fast cars, while North Point is a neon-illuminated nexus of cramped apartment complexes, seedy clubs, shady vendors and bustling night markets. Street-racing down high-class Central or chasing and beating down thieves in the claustrophobic, tight neon-lit alleyways of North Point always offers unique experiences to attribute to each vibrant district of Hong Kong.

“Street-racing down high-class Central or chasing and beating down thieves in the claustrophobic, tight neon-lit alleyways of North Point always offers unique experiences to attribute to each vibrant district of Hong Kong.”

Navigating the city on foot is always fun as the athletic Wei, who is able to run, vault, jump and climb over the various buildings and obstacles in his way, and the arcade-like driving mechanics are fast, fun and effective, polished and on-par with the best offered in other sandbox titles. Being able to jump out of a moving car and hijack another one is bad-ass, too.

The missions themselves are diverse and varied in what they involve. The main storyline missions always offer variety as Wei works his way up the Sun On Yee ranks and avoids suspicion by completing tasks from his Red Pole superiors while keeping up-to-date on his undercover police assignments. While the initial questlines feel a little too stock-standard- fetch, beat up and return- they are always entertaining and interesting thanks to the superb voice-acting and motion capture animations. The missions eventually open up into richer and more standout scenarios, such as re-enacting a dodgy drug deal gone bad with your police inspector, or finding yourself amongst a chaotic wedding shootout being two prime examples.

The side-quests and activites which are completed for Face experience range from free-running across the rooftops of North Point to singing Karaoke with the hot hostess girl at Club Bam Bam (or stalking her for cheating on you). All missions are handled well and though some end up being similar, the combat, characters and inevitable rewards make up for it. For example, minor character Calvin tasks Wei with being his getaway driver, but the crazy circumstances that lead to Wei driving him and the banter and bickering that ensues is hilarious and really shows UFG really put effort into the little things, these side-missions and minor characters included.

Heaps of collectibles in the form of Jade Statues, which when returned to your former Kung Fu master, allow you to get more bad-ass melee combos, shrines which upgrade your maximum HP, and an in-game medals system which rewards new items based on the things you do will keep players busy, as there’s plenty to see and experience beyond the main storyline.

Despite how much it got right, there are just a few little bits and pieces in Sleeping Dogs which aren’t so polished. The girlfriend dating missions, for instance, were clearly a wasted opportunity and seem like they were in the process of being a major gameplay aspect, only for United Front Games to cut it out abruptly down the track. The storyline and Wei’s interaction positions you to care about many of these girls, including Emma Stone’s Amanda Cartwright, but many of the dates and their characters simply end and disappear after one or two missions. Wei getting his stalker on about one of the girlfriends in particular for cheating (only after two in-game “dates”) is particularly odd in its inconsistent characterization of Wei, who to that point in my game journey, wasn’t exactly a crazy stalker. It definitely shows something substantial was cut, yet was not cleaned up efficiently.

The draw distance of the game isn’t very impressive and some will be put off by the moderately frequent texture-pop in (Xbox 360 version was tested), but if you don’t care about girlfriends or overly pretty graphics usually, then you’ll be too invested in the fascinating story or having fun with the awesome gunplay and CQC combat to care. The PC version is reported of much higher graphical quality than its console counterparts with an HD texture pack, so if you’re looking for the added presentation, seek the PC version. 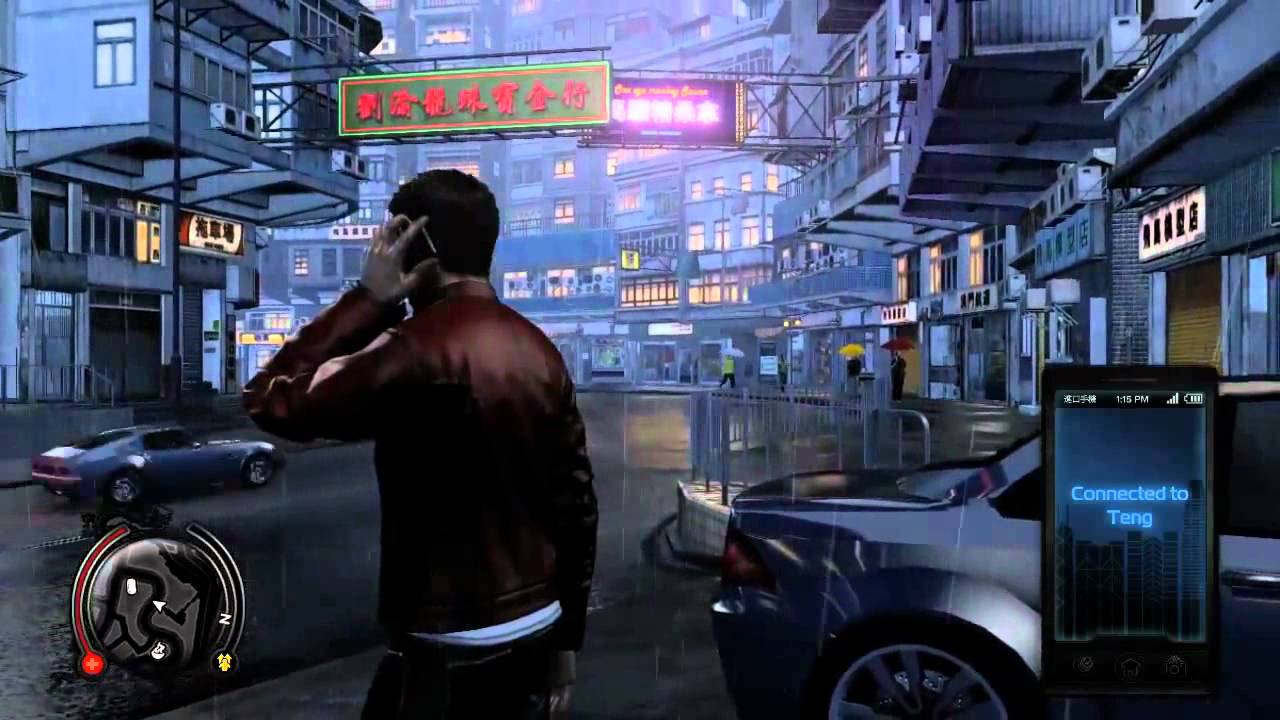 Sleeping Dogs is my sleeper hit of 2012, and with good reason. With a polished, detailed Hong Kong to explore, plenty of Triad gangsters to bash, pummell and shoot, and an edge-of-your-seat storyline through the underworld of the Sun On Yee to experience, alongside interesting characters and superb voice-talent and dialogue to match, you’ve got yourself a real treat to play. While it doesn’t do much different to other sandbox titles, it certainly adds a lot more on top and does alot better in many areas than the GTAs and Saints Rows before it to stand-out as a must-play title.

Do yourself a favour: don’t dismiss Sleeping Dogs as another generic sandbox or open-world if you’re looking for a great game to play. The solid combat and driving gameplay and its expansive and rich Hong Kong setting will draw many players in, but it’s the superb story about the heavy burdens of an undercover cop in a city devoid of any honour which will keep you playing until the end.